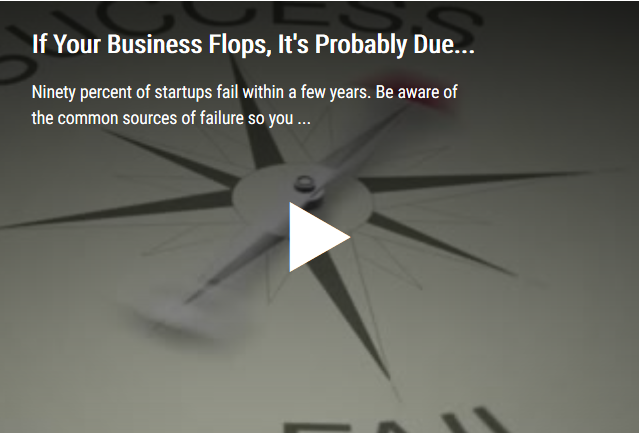 If Your Business Flops, It’s Probably Due to One of These 7 Causes

Businesses fail every day. In fact, statistics show that the majority of new companies will fold within a few years. Why is that? What are the most common reasons for these flops?

Naturally, interested parties have generated a variety of studies and statistics regarding the factors for success and failure among startups and small businesses. A study from CB Insights is one of the most startling. It shows that 90 percent of startups fail within just a few years. In fact, if you launch a business today, you have only a 10 percent chance of still being in operation a decade from now. There’s no way around it.

As a savvy entrepreneur, you should be aware of the most common sources of failure in business so you can avoid them. Let’s run through the seven commons causes of failure.

The majority of entrepreneurs go into business because they have a sharp idea or a passion for a particular market pain point. Some of these entrepreneurs might also have a background in accounting or financial services, but this is more often the exception than the rule. Sad to say, but most new business owners are financially illiterate — or at least start out in that condition. Almost inevitably, this comes back to bite their cherished undertaking.

“Why do most businesses fail? Because they can’t pay their bills,” says Bill Carmody, CEO of an established marketing firm. While vendors and creditors may act like they care about your business, they only care so long as they’re getting paid. “Companies don’t go out of business because they lack profits on their financial documents, they go out of business because they don’t manage their cash and can’t pay their bills.”

It’s absolutely imperative that entrepreneurs learn how to humble themselves before others. One of the worst mistakes you can make is to be unwilling to seek outside help when things get tough.

“The ego. How many times have we argued with someone knowing they were really right, yet we just won’t give in due to that darn ego,” says Donald Burns, a 33-year veteran of the restaurant industry who warns against shutting out other perspectives. “Egos have started wars, ruined economies (the housing bust), and closed the doors of more restaurants than we could list here.”

As they say, pride goes before a fall. Whether it’s business advice, financing or any other form of guidance, business owners must be willing to seek outside help.

According the aforementioned CB Insights study, 42 percent of startups eventually fail because there’s no pressing market need for the products and services they want to sell. That’s the number one cause of small business failure.

It’s important that you study the market and potential demand for whatever you’re hoping to peddle, and avoid fooling yourself. Is there an actual need for your product, or are you trying to create one for selfish reasons? Knowing when to pivot or bow out is a skill you’d better have, or you may find yourself in a world of trouble.

A handful of bad hires can derail even the most successful brand. According to Mariah Deleon, Vice President of People at Glassdoor, hiring bad candidates hurts in more ways than one. The risks can involve productivity costs, financial costs, employee morale costs and reputation costs. Even if the person eventually turns into a good employee, the upfront costs mean he or she could pose a drain on resources for many months.

Speaking of financial costs, well-known recruiter Jorgen Sundberg says the total lifetime cost of onboarding an employee is $240,000. In other words, if you’re repeatedly hiring, firing and replacing, you’re throwing some serious money down the drain. Eventually, this will constrict your company’s financial flexibility and could put the entire enterprise at risk.
5. Unwillingness to pivot.

After a company has been in business for a few months or years, company leaders may realize their original, brilliant idea wasn’t as great as they initially believed. In fact, they develop a nagging sense that the marketplace is telling them to move in another direction. An unwillingness to trust such signs and pivot is an almost sure-fire signal of ultimate destruction.

Think about what would have happened if Odeo — the podcasting company founded by Evan Williams — had never listened to the marketplace and failed to pivot into a real-time social messaging platform. Twitter wouldn’t exist! And do you think that original podcasting company would still be around today? It might, but it probably wouldn’t be a multi-billion dollar corporation.

Sometimes the business idea itself is sound, and you have the right people and financial acumen, but operational inefficiencies are the thing that holds you back. Paying too much for rent, labor, machinery, materials, shipping and so on can put a strain on cash flow and kill the profit margin. In order for businesses to be successful over the long haul, they must demonstrate a constant willingness to reevaluate and negotiate rates, terms and contracts with the respective parties at every point on the supply chain.

This often goes back to poor hiring practices. But it’s also directly related to executive leadership and management. According to Julie Rains of OPEN Forum, some of the tell-tale signs of an unhealthy company culture include playing favorites, a lack of constructive feedback and criticism, small issues that get repeated over and over again, employees who are defensive and frequent bending of the rules.

Small businesses go belly-up for any number of reasons. Though every organization is exposed to its own array of circumstances, risks and situations, at least one of the seven issues above is almost always implicated in the downfall of a company.

When it comes to your company, are you sitting back and hoping your activities remain strong? Or do you take a proactive approach in order to avoid the problems that have derailed so many other small businesses in the past? Ask anyone who’s been through failure, and they’ll tell you that the latter approach is the smarter choice.

Sections
Be Informed
We respect your privacy that is why we do not intend to sell or share your information.
Copyright © 2016 - 2020 Entrep.ph - All Rights Reserved.
Site Map
Back To Top